A Short History Of Tatebanko

Today, it is experiencing a resurgence.  Commercially printed kits are available through tatebanko.com.  You can find patterns and instructions as PDF files which can be easily printed on a home computer.

The construction pieces were originally multicolored woodblock prints. There could be as many as ten sheets of paper in a single kit. The individual pieces are cut from the sheets.  They may be folded and then glued to a paper base to form the scene

A Few Original Tatebanko Prints Are Found In Museums

These are our most popular paper dioramas:

You can see several examples of classic and modern tatebanko on our Pinterest board. 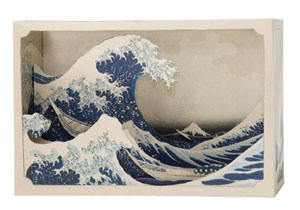 Hokusai: The Great Wave off Kanagawa.

A Short History Of Tunnel Books

The Europeans developed paper dioramas during the 18th century.  They were first made to resemble a theater stage.

A later variation replaced the wide stage opening with a small peephole.  The diorama was viewed through the peephole.  This controlled the viewers perspective.

A tunnel book is a set of pages bound by two accordion strips, one on each side.  The scene is viewed through a hole in the cover.  Each page depicts a layer of the scene.  The pages are cut to allow the viewer to see through to the back of the book.  All of the pages work together to create a three dimensional scene.

Tunnel books are experiencing a renaissance.  Modern artists are reinterpreting them as sculpture.  Not only do they produce an interior view, but the outside of the book is integrated into the piece. 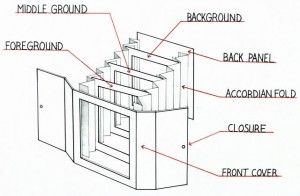 These are our most popular paper dioramas: