The Neuschwanstein Castle Paper Diorama project lets everyone enjoy the unique beauty of this picturesque building.  It is easy to see how it inspired the Sleeping Beauty Castle in Disneyland.

This paper diorama places the Neuschwanstein Castle on its rugged Bavarian hill top.  You can see all sides of the castle and its high walls.

Things You Will Need 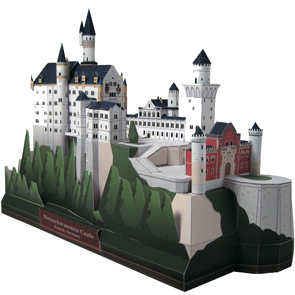 You don't have to worry about printing. You can print at home or have this paper diorama printed for you.

I email my files directly to on-demand printers like Office Depot, Staples or Kinkos.  They print them for me while I am at work.  I just swing by to pick them up on the way home. Give them a call to make sure you have everything they need.

Oh, I always print the instruction files on regular paper.

Neuschwanstein Castle is a nineteenth-century Romanesque Revival palace built on a rugged hill in southwest Bavaria, Germany. The palace was commissioned by Ludwig II of Bavaria as a retreat.

Construction was started on September 5, 1869.  King Ludwig II was able to live in the castle while it was being built.  He died on June 13, 1886 before the castle was completed.   In the end, Ludwig II only lived in the palace for a total of 172 days.  Construction ended in 1892.  It remains incomplete to this day.

The palace was intended as a personal refuge for the reclusive king.  It was opened to the paying public immediately after his death in 1886.   Since then more than 61 million people have visited Neuschwanstein Castle.   The palace has appeared prominently in several movies and was the inspiration for Disneyland's Sleeping Beauty Castle.

Its Time To Print The Neuschwanstein Castle Diorama

The images are available in both letter ad A4 size paper.

If you live in the US, you'll want to print the letter size images.

Please, be sure to print both the pattern and the instruction files.

Get The Neuschwanstein Castle Paper Diorama

Get The Neuschwanstein Castle Paper Diorama

How To Set Up The Printer

You can find projects on the  Tatebanko – Paper Diorama page.

You can find other paper projects on the Cannon Creative Park website.