The Mont Saint Michel Paper Diorama project lets everyone appreciate this island monastery.  It is easy to see why it has been a stronghold for centuries.

This paper diorama places Mont Saint Michel on its island.

Things You Will Need 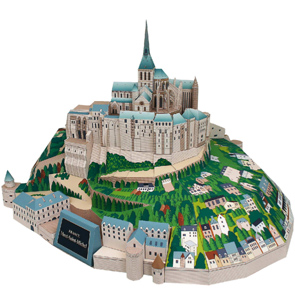 You can print at home or have this paper diorama printed for you.

You can email my files directly to on-demand printers like Office Depot, Staples or Kinkos.  They can print them while you are at work.  Give them a call to make sure you have everything they need.

Oh, I always print the instruction files on regular paper.

Mont Saint Michel is an island commune in Normandy, France.  It is about half a mile out to sea. It is located at the mouth of the Couesnon River near Aranches.

The island has been strategically significant since ancient times. During the 8th century they built a monastery on the island.  Today the island is named for the monastery.

The people who built the town reflected their feudal society in the way the town was built.  At the top is God shown by placing the abbey and monastery at the highest point.  Next came the great halls followed by stores and housing.  At the bottom of society and outside the walls are the fishermen's and farmers' housing.

Its All About The Sea

The Mont is only separated from the mainland at high tide.  At low tide you can walk to the island.  This trick of the sea has made Mont Saint Michel important for centuries.

The island was unconquered during the Hundred Years' War.  A small garrison successfully defending it against a full attack by the English in 1433.

The French King Louis XI turned the Mont into a prison. He realized that the sea kept people trapped on the island at high tide.  Thereafter the abbey began to be used more regularly as a jail during the Ancien Régime.

Today tourists and pilgrims can readily reach the abbey at low tide.

Mont Saint Michel and its bay are a UNESCO  World Heritage Site.  More than 3 million people visit it each year.

Its Time To Print The Mont Saint Michel Paper Diorama

The images are available in both letter ad A4 size paper.

If you live in the US, you'll want to print the letter size images.

Please, be sure to print both the pattern and the instruction files.

How To Set Up The Printer

You can find projects on the  Tatebanko – Paper Diorama page.

You can find other paper projects on the Cannon Creative Park website.